Since our Handbook tells us that we must “work for the most wretched and dejected of the population,” some dynamic Legionaries, male and female, undertook the apostolate to Chicago’s “Skid Row”. They talked to men they met on the streets: they visited the hotels. As the work progressed, they were successful in having Mass celebrated at regular intervals. Results were not overwhelming, but many men were visited and a good number participated in the Mass. Work continued until the city of Chicago decided to rehabilitate the area: hotels were torn down and Skid row as no more. 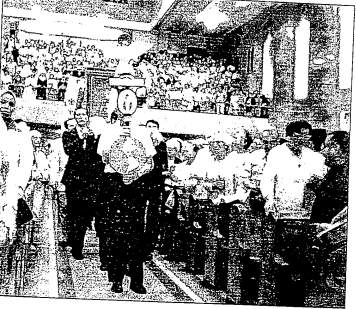 Since we became a Senatus 25 years ago, many changes have taken place in the Church. The Legion of Mary has been affected by many of these changes. With the deterioration of many Chicago neighborhoods and the closing of parishes, the Legion has not grown as we would have liked. But thanks to our dedicated spiritual directors and presidents of the Senatus, Our Lady’s work is still being done. We have had setbacks and some rough times, but we have tried to accept all these as “challenges.” As we begirt our second quarter century of work, we realize there is still much work to be done. There are many homes to be visited, many hospital patients waiting for a visitor, much Catholic literature to be distributed, many young

Outdoor Rosary at Daley Plaza before procession to St. Peter’s.

chil­dren to be instructed for reception of the Sacraments. many Junior Legionaries to be helped. much work to be done for the missions.

Let us always remember the first sentence of our Le­gionary prayer: “Confer. 0 Lord, on us, who serve beneath the stan­dard of Mary, that fullness of faith in Thee and trust in her, to which it is given to conquer the world.”